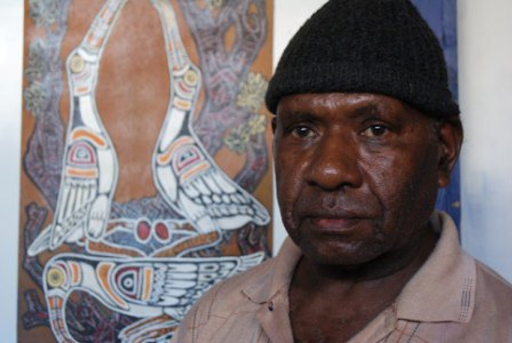 Many of us West Papuans when we were little we went to school and experienced that racism. And also other forms of oppression through the education system.

When we went to school we learned about, because the curriculum is a national curriculum so, we learned about something that is out of our minds. For example, in one of the reading we learn about someone who goes to the rice fields, works there and sees a buffalo, a cow. But that becomes something out of our imagination because when I was little I never saw those kinds of animals or the rice fields. I have to able to imagine it in order to understand what is on the [homework] tasks. So that is one of the examples.

And we also learn a lot about the history of Indonesia as a state and culture. But then when I went to the university in Java I started to realize that they don’t know about us, but I know much about them. Because I learned it during school and they never learned about us. For example they ask ‘Is your hair real?’ and they touch the hair, ‘How do you wash your hair?’, ‘Do you wash everyday?’, ‘How do you brush your hair?’, ‘Is there any particular comb you use for your hair?’, ‘When you wash it is it dry?’, those kinds of questions.

When we are not ready we will cry but luckily our parents prepared us before I went to study saying ‘You’re going to face these kinds of questions so you have to be ready to answer it’.

And also other experiences like, even in West Papua, even if we get very good education, we graduate from university and have some capacities. But because of our identities as Papuan sometimes according to them we are not capable enough to do certain jobs. In a public service for example or some specific skills. So something related to technology for example, sometimes some people thought that we don’t know how to operate a computer. Just because we don’t dress up like a professional with our dreadlocks hair. Sitting there, pretending as if we don’t know anything. They even ask ‘Do know how to operate a computer?’.

And the worst thing was when I went to the bank, the ATM machine, one of the security guys came to me just because I have dreadlock hair, wear slippers and short pants, he came and asked ‘Mam, do you how to use this ATM?’. And my reaction was ‘Before you worked at this bank I already had a bank account at this bank so do you ask this to me?”. Because of this kind of experience I have to laugh about it because you become crossed with someone. Always when I have this kind of experience I make try to make it into a joke. The good things is that Papuans always try to make this kind of experience into a joke as they can laugh themselves as a part of healing their trauma’s. We’re laughing at the stupidity of these people. Because for us they are so stupid and ignorant. And we have pity on them actually. Instead of getting angry at them we’re making fun of them and laugh about it. But we realize that that’s a part of the action, of how the system and all these kinds of stigma and stereotypes exist. So if I talk about experiences, there are so many. I believe that other West Papuans will tell similar stories. Those two are an example of how we experience that.

We can put it into two angles, I think first is, when we talk about becoming strangers [in our own country], it’s very much related to dominant the new culture became and exists. We have to kind of adapt and adopt new values or a new culture. The numbers of the population for example. We can now see that West Papuans became a minority, more and more Indonesians are coming to live and share their culture, their values, their food. Their way of life. It’s really influencing the Papuans in terms of trying to live in that situation. Just one example you know. When the transmigration came along with the government program, or government project on rice. Where there is a process of trying to change the staple food in West Papua from root crops and sago to rice. So then through the transmigration program the government put a lot of money in it and support the development of this agriculture project on rice fields. There is a kind of promotion of that rice is much better because it has more nutritious values. Then people started to think that rice is more nutritious and more acceptable for the new system. And the sago or sweet potato that we eat is not nutritious so then we have to work hard to be able to access the rice. So it changed the way of life. Not only the existence of the people is endangered but also the culture and the resources that we have. Population is also one of the things because the majority of the people came from outside of West Papua. They bring with them their culture and their way of life and it’s really dominating all aspects of life. Us West Papua are trying to find their existence in between the domination. When we talk about racism, this is actually what happened, domination is part of the racism that exists even though people probably didn’t realize that. That’s also part of the way that one particular group dominations the other group. So I think in West Papua we experience that as a part of the structured and schematic occupation. Which is not only the physical killings by the military operations like Operasi Koteka and others, but it also through other systems like the health systems, education systems, changing people’s mindset, changing Papuan mindset. You can have black skin, curly hair, physically still looking like many other West Papuans but in terms of your mindset you are really losing your identity. You lost your identity, your way of thinking as a West Papuan because the way you look at things is totally changing and different. You can’t accept the reality that you are West Papuan and have a certain unique identity so that process of internalisation of the racial process where you try to accept that. You try to make an adaptation and you become like them, the dominators. Even though by skin color you are West Papuan but actually by mindset and by way of thinking you become more Indonesian.

My name is Rosa Moiwend. I’m a West Papuan. I live in West Papua and my daily activities, I’m an activist, like a women’s activist, but I’m also on human rights issues. But I also am particularly, because of my family's interest and background, I also spend more time on the cultural aspect of our identity in West Papua. Because my late father he was an artist. He is one the senior artist in West Papua so I’m kind of continuing his legacy on the art and cultural aspect. So that’s basically my activities.

My father's name is Donatus Moiwend. I believe that some of the senior artists of West Papua might know him. He has good friends and family, like the Koerni family and the Ap family. They are the people who in the late 1970’s to early 1980’s were very active in the cultural revival and cultural movement of West Papua. They try to work on various forms of arts to embrace the identity of West Papuans and to talk about identity. Some were working on music production, dancing or theater, also like writing poems. My dad was working a lot on painting , carving and collaborations with other artists as well. So basically what he was trying to do was talking about who we are and to get the perspective from our own eyes, as Papuans. That really influenced me in the way I am working right now.