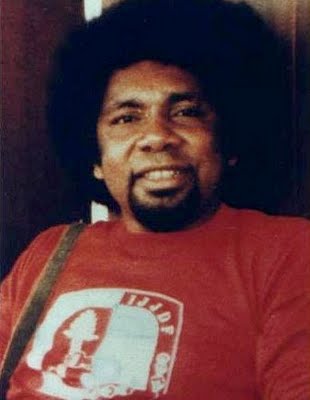 My father was an anthropologist, a curator of the museum, made music, and had contacts with freedom fighters at the time.

I think he tried to make the Papuans aware of the importance of asserting our rights through music. He wrote songs about the desire for freedom and the right to self-determination. So in this way I think he gave substance to the great vision and mission of the independence movement. And he became an important tool to mobilize the Papuans through music, storytelling, and culture, which is a very important aspect of us as a people. And that eventually led the colonizer Indonesia to see in him the danger of a connector, an activator, and thus he ended up in prison. A first time, a second time and the third time the Indonesia army set up a fake scenario of him escaping, which eventually became the reason to shoot him in the back.

From that moment on, our identity and culture was directly under pressure. And one of the consequences is, for example, the loss of my father. He was killed simply because he wrote songs and sang about the Papuan identity and the importance of safeguarding it. His songs are still banned to this day. The political murder of my father is one of many examples of the suppression of our own identity and culture. We cannot be ourselves in our own country. The native way of dressing is suppressed, stigmatized as primitive,  not Indonesian. The customs of Asian Indonesia take over. Papuans need to get dressed. And with that we lose the crucial elements that make us Papua. Being one with nature, the old garb, our way of cooking, singing songs. Something that has been done for centuries and in which traditions from father and mother are passed on to children. This is the murder of our culture, of who we are, of our identity. And that is why we are happy that we have that freedom in the Netherlands, and we make optimal use of it.

Of course in my early years, I rarely talked about any of it. In fact, I was a little embarrassed because it was a very unknown topic and there was a very negative stigma surrounding the word Papua. It was perceived as a joke. And later, when I started to become more involved with human rights and activism, I discovered that it was precisely, I dare say consciously, that our shared history was kept away in not only the history books but also in the media. That it was hardly reported in the 1970s and the following years, our special shared history, the promised freedom and all human rights violations that take place there. As a result, generations of Dutch people in 2020 hardly know that we have a shared history, let alone what is going on. And that is an important motivation for me and all the people of our campaign who tell this story. And what you see is the shock in the reaction of the Dutch in particular. 'I did not even know that this was a colony of the Netherlands, that it was so connected and that there are so many New Guinea veterans who cry every year at the National Veterans Day because of the special bond we had and how they let us down.' The government, not the people, the government.

West Papua is clearly part of the island of New Guinea. And the island of New Guinea is located directly above Australia. And we are actually one people. Or at least it is one type of ethnicity, Melanesian Pacific. We have dark skin, frizzy hair and our cultural traits correspond to Papua New Guinea, so the eastern part of the island, and all other islands in the Pacific region. So we feel and we are allied geographically, culturally and ethnically, to the Pacific, to Melanesia. This is evident in all those facets. The fact that we are part of the Netherlands underlies the colonization from the Dutch era and the Western countries and ships that sailed to the Pacific and around the world. And so also on New Guinea and the Indonesian archipelago, so that West Papua was previously part of the Dutch East Indies, and after the war of independence of Indonesia, there was a quarrel between the former colonizer Netherlands and the current colonizer Indonesia, or New Guinea who should belong to or had to be colonized. And the Netherlands wanted to decolonize it, it promised Papuan freedom, but it didn't get that far. Indonesia annexed it in 1963 and since then we belong to the Indonesian state, with great reluctance. Because we absolutely do not feel connected with them. Not geographically, not culturally and ethnically and with all its consequences.

The cultural aspects I got as a young child is singing songs. That, of course, has been a very important guideline in my life for my father. Music. And that occurs everywhere in Papua, but also everywhere in Melanesian and Pacific culture. But also within other indigenous groups. Music is such an important element of our identity as Papua and that is also something he conveys through his music. As an anthropologist, he studied the different tribes, and for people who don't know this yet. Western New Guinea, so only the western half, consists of more than 250 different tribes, each with their own culture and norms and values ​​still in it. In the great Papua picture. So with this you see that the importance of culture and identity is such a crucial trait, a hallmark of us as Papua being.

And what I have happily experienced in the Netherlands and have been able to experience throughout my life is the musical aspect. And I think that with every Papua family, at a birthday, the guitar is present, the tifa is present, the ukulele is present, and we are going to make music together. And by making music we tell, or sing songs that actually tell a story from the past. From our ancestors. And I think that you are passing on a very important way of storytelling, through music. So that. Fortunately, we do this as often as possible when we are together.

And in addition, we do every once in a while, I think every other year, indeed we try with the Papua community in the Netherlands, the barapen. That's a ground oven. That is how the Papuans and various tribes in the Pacific, Melanesia, prepare their food. Then they dig a hole, throw hot stones in it and then add meat and vegetables. And then the whole village will enjoy such a party meal. That is also a very important cultural feature and characteristic of the identity of the indigenous Papuans. And I think that these are the two most obvious examples that we try to keep alive here in the Netherlands, and can participate in them. And in addition, there is also dancing, performances, which we provided by Pasar Malams through a dance group here in the Netherlands. At other events of people who invite us so that we could tell our culture to the Dutch here through dance and music. This is how we look at Papuans, this is what we do, make music, when do we do this. And then we explain, at weddings, at parties. And so I think we give substance to our identity here in the Netherlands. 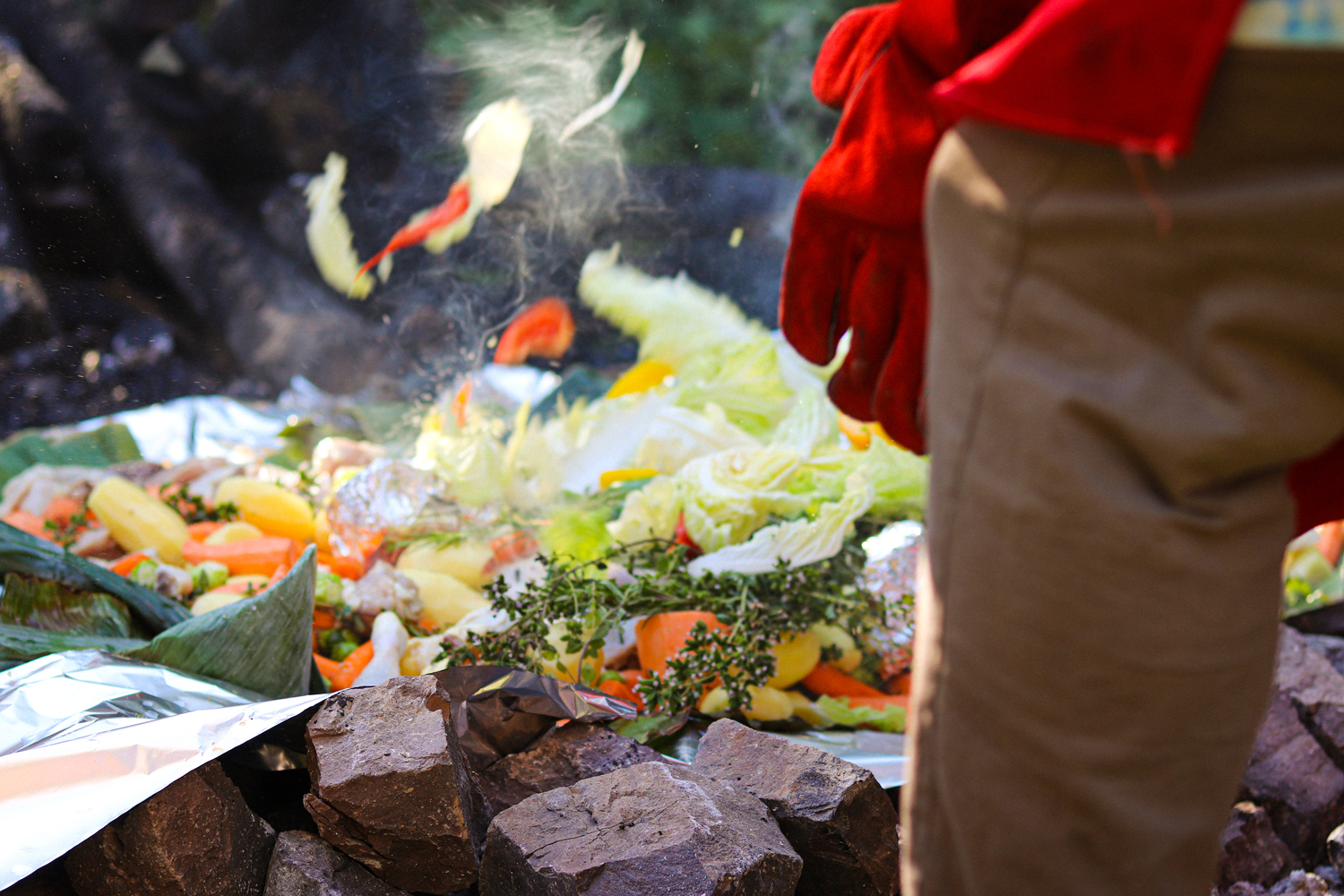 A barapen, or ground oven, being prepared during a cultural festival in the Netherlands.
Source: Video Ap

I am Raki Ap, the youngest and fourth son of the murdered anthropologist Arnold Ap. Killed by the Indonesian army. That happened four months before my birth in 1984. After my father was murdered, my mother and three brothers fled to a refugee camp across the border in nearby Papua New Guinea. After we stayed there for about a year, we fled to the Netherlands. Where I grew up as a child, without a father. And actually built my life. When I realized why I didn't have my father, then I started to delve into who I am, why I don't have my father anymore and what is West Papua. And that has transformed me into the person I have become and now I live as the spokesperson for the Free West Papua campaign. Also here in the Netherlands and Europe as an all-round activist who is committed to the political self-determination of the Papuans as the first priority but to highly affiliated activism, human rights and climate. That's who I am and somewhat what I do.

The message I would like to convey to those who have seen this, and those who are unsure or believe they can achieve change. In your environment, in your city, in your country. If you doubt that and say what can I do? I invite them to see what the Papuans have achieved in the past 10 years. Knowing that they have no freedom. Knowing that they are being oppressed. And knowing that they have very limited resources to realize that change, which they have done. We have made history on history for the past 10 years. And once we have realized that, my optimism that I radiate every day is grounded in; we did it in such a difficult situation. Imagine what we can do here in the Netherlands or in the Western world with all the capacities, freedoms we have.

Change is a choice and it starts with you.