When the Netherlands became active in Papua, they focused on a number of young Papuan men, often the sons of clan chiefs, or chieftains as it was also called, and my father was one of them.

He was the son of Pieter Jouwe who was chief of the clan Jouwe My father was at a young age already seen as a promising young man, together with a number of others, such as Marcus Kaisiepo. In the period when the Netherlands entered into negotiations with Indonesia, because the Netherlands had in fact lost the battle for the Dutch East Indies, and the independence fighters of Indonesia had won. It all had to be arranged neatly. And that was done in the Round Table Conference in the Netherlands in 1949. And my father was part of a Papuan delegation, along with Marcus Kaisiepo and others, so they also came to the Netherlands at the time. Their role was very modest, they were only spectators. But my father was only 24-25 years old at the time, a very young man. And actually saw all kinds of political machinasic that happened before his eyes. 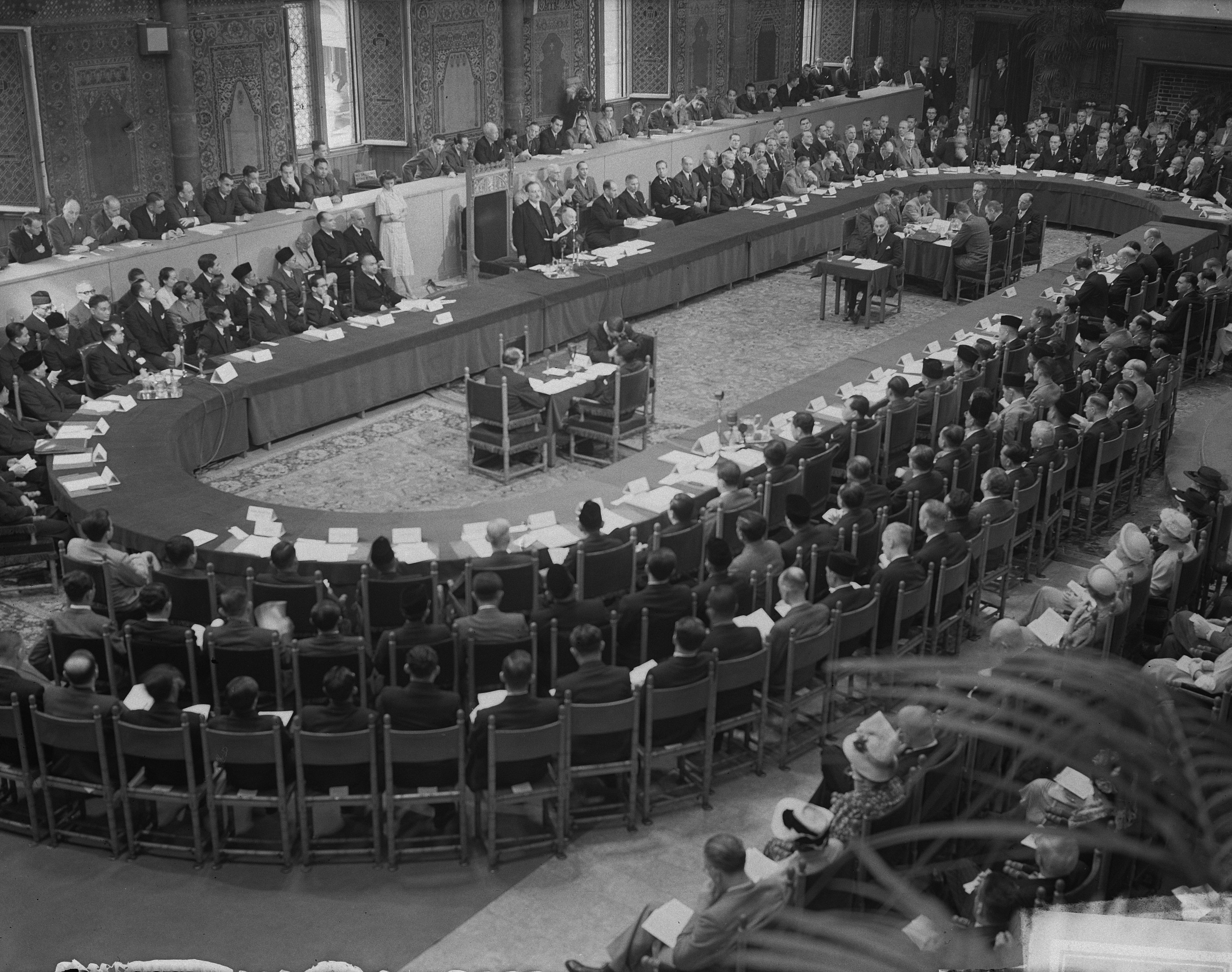 Long story short, forwarding to the New Guinea council, which was set up 12 years later. My father ran for office and was elected to his region by a crushing majority. Very funny polygon videos can still be seen. My father, now in his forties, was then elected. In the New Guinea council, there were elected and non-elected members. And my father, together with Marcus Kaisiepo, became two vice-chairmen. Apparently the Dutch did not think it was the time when Papuans could actually be chairmen, so that became a Dutchman, Mr Sollewijn Gelpke. So that was the president, but two vice-presidents were two Papuans. And also nice to report was that a woman took a seat on the New Guinea council. They were not allowed to talk about two things, that was finance and foreign policy, but otherwise everything that had to do with New Guinea politics, they could discuss that. 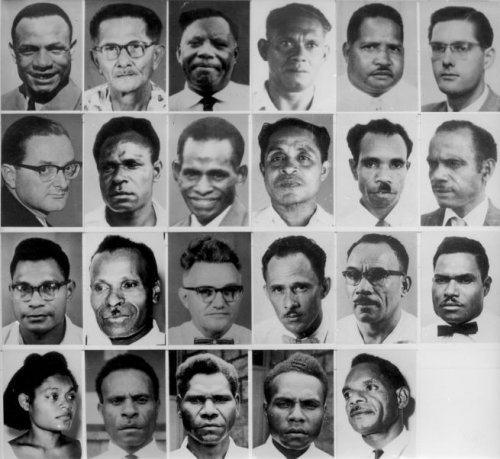 Ultimately, the New Guinea council was of course not able to function for more than a year because the tensions ran very high. So both Marcus Kaisiepo and my father had to flee and actually started lobbying in the international arena to get attention for what was actually going on in Papua. So my father, among others with a number of other Papuans, including Mr. Tanggahma, also started lobbying in various African countries. So that was also the thinking of those men, those are also black peoples who fight for independence, just like us. Hopefully we can get them behind our fight too. There were also African countries that were interested in this.

Anyway, the super powers that be, like Russia and the United States, had a supreme power back then. This meant that, despite the fact that my father also went to lobby at the United Nations in New York, there are also videos of that, along with other Papuans, including Zachi Sawor, and others, Marcus Kaisiepo has also New York lobbied. Unfortunately, that was of no use because the world power they had to fight against was simply too big. And that also meant that it was precisely those persons who had moved into the arena of world politics who had to leave very quickly. The Dutch government said to my father, the Indonesians are going to kill you, you really have to go now. That is why we, my parents and two of my brothers, in the middle of May '62 fled to the Netherlands.  One brother came to the Netherlands before us. So I consider the Papua community and certainly my family as a family of political refugees.

Everything in our lives has been drenched in that flight. You could say Papua was the only thing important in our family. Fortunately there was my Indian mother who was very down-to-earth and practical, although she strongly supported my father in everything he did. She was his counselor, his translator. Someone who really supported him. She was also so level-headed to ensure that the children were taken care of. Going to school, doing homework and also going to college. But we were always taught at the kitchen table by my father about New Guinea, the world politics, and what had happened to us. We as children had different reactions to this. At first, my brothers found this very uninteresting because it was a message he kept repeating over and over. Of course it stays with you.

I could say that we as a family also very much understood that a trauma had happened, that we can also speak of collective trauma that we have experienced as a community, as a family and that this was also reflected in how we dealt with each other. So my dad could become really angry about things, and then we knew we had to keep ourselves calm. It was a man who also had to live with deep frustrations because he was so insanely betrayed by everything and everyone. At the same time, he had the strength to keep fighting from that refugee position, he didn't hang his head either. All the money and all the energy went into it, and we thought that was the most normal thing in the world as children. We went on holiday together, I never felt that we were poor or something, but I think that for many Papuan families it was true that all the money and energy went into the fight for independence. I think the parents that had to flee, they  raised their own children differently, trying to develop themselves as a happy person in the Netherlands. But the second generation really saw the traumas and frustrations of their parents up close. They experienced that lost battle, you could say.

But of course there is another element, that is that within Papua, native Papuans are already the minority in certain areas. And that, of course, is something that we really have to worry about because you see that there is a kind of slow takeover that cannot be reversed.

There you see that the Papuan identity is very much endangered and that is indeed something that I really find very sad and that I am very concerned about.

The fact that the flag has now been banned at Veterans Day also speaks for itself. It is a very interesting example that shows how sensitive that political relationship still is and how political that flag still is. So I think that the flag could and should be used very creatively in many ways. That flag is by the only living soldier from the Papuan volunteer corps, Uncle Demy, who walked with the veterans parade every year and then he also had the flag with him. And at some point, partly because of people like the Ap family who are also in The Hague and who also started to do something more with the veterans, that flag became more visible and more and more young people who also show Papua flag in the audience as the veterans' parade passed. And I think that went wrong at the Indonesian embassy, ​​that they complained at the time and that Rutte indeed said at a certain point: It is no longer allowed. And I'm talking about Uncle Demy Prawar, who unfortunately passed away last year. There you also see that that flag is being politicized again. It does not mean that the flag should not be allowed to fly, but it has become too sensitive on veterans' day.

Why could the Netherlands do so little about the whole situation around Papua? There are also a number of reasons for this. One is that, of course, the Netherlands was very ashamed of what happened. Because they actually waged a war there, In '49 she lost to Indonesia and thereby lost the Dutch East Indies. And 12 years later they actually almost went to war with Indonesia again and then lost Dutch New Guinea. And if you speak Dutch soldiers who were also sent there, there are people who are still ashamed. And they still have trauma from that. A number of times I also had contact with soldiers who wanted to tell their story, because I am my father's daughter. You noticed they were really traumatized.

But in addition, the importance of maintaining economic relations with Indonesia is many times greater for the Netherlands than worrying about the human rights situation of a small group with which they once had something, but now no longer do. And that is a much more cynical reason, but nevertheless also a very important reason why it was less interesting for the Netherlands. The diplomatic relationship between the Netherlands and Indonesia has also remained very sensitive for years. You will notice this best through the royal visits that have been in recent decades. And that it also took a long time before the Netherlands could even admit that Indonesia was actually in an independent state in '45. The Netherlands, of course, held on for a long time to four years later in '49. And if you look at other countries that are former colonies, the relationship between them, for example a country Portugal has been able to help the East Timorese cause much more than the Dutch have done and I think that really the Dutchman's trading spirit, we will still let's just say, the VOC mentality has dominated this.

Eight years ago I composed a book about 50 years of Papuans in the Netherlands. It has become a photo book in which three generations of Papuans can also be seen. And in the interviews conducted by a journalist, Eva Prins, a number of Papuans also talk about their background and how they view themselves. What you see there is, because you end up here in the Netherlands as a second or third generation, that you actually also get that you should be ashamed of your Papua background. And that it is really a kind of process to be proud of that background sometimes. There are people who say that they really have taken a different name than their actual name. And hid behind a different kind of identity and did not dare to admit that they were Papua, but for example by asking their children to grandma, then suddenly got something like 'wow, wait a minute'. This is indeed something very important. But what I also like about Papuans is that they are very capable of adapting to circumstances, while trying to keep their own identity alive. I think that's also because Papuans always have to adapt to the nature around them, in Papua itself. Nature is so biodiverse, it is unbelievable. In all these circumstances, Papuans have managed to survive. There is part of the power, think. That because of this Papuans have learned to maintain themselves in what is then called the diaspora. So those who have had to move to other places on earth because they can no longer live in Papua.

My name is Nancy Jouwe, I am 53 years old and I was born in the city of Delft. I have a Papuan father and an Indian mother, they are both now deceased and my father is Nicolaas Jouwe, Papuan father.

Inform yourself about Papua, there is a lot of information to be found. Online, but there are also many beautiful books written, so get curious about Papua. Listen to what Papuans themselves have to say about it. There are also many beautiful videos made by Papuans themselves that can be found online. If you think I want to do something, you can also donate to the Hapin foundation, for example, or the many small organizations and solidarity initiatives that exist in the Netherlands. Or start a campaign yourself which makes Papua more visible. But try to get curious because it is part of our Dutch history.