Drawings made by Liben Lilbid showing the bombing of his village and his future dreams.
Source: Hapin

In my process, in my art when I work, I try to reach for old concepts, or maybe the old stories or songs in Papuans concept. In some tribes. And try to reference it. Updating the situation in Papua all over the world right now.

That’s how I work so that time before the exhibition in Amsterdam I was concerned about one project that’s called ‘Mairi’, and Mairi is a fairytale, a beautiful fairytale that comes from a place called Bintumi Bay. And this fairytale talks about a place which is a paradise, a place for peace and love and were we respect each other. And this story, if you want to reach Mairi you have to through the big forest and everybody gets lost there. But a kid, a boy, he passed the test, he killed all the satans, he came into Mairi and brought his people to enter. I was thinking about this story and then the Nduga tragedy happened and I read about 600 kids that had to run away from their village, from the violence. And I said ‘Wow, it is happening’. Everytime I am thinking about this story and I believe it’s something like a prophecy from the past to happen in the future, in our generation. So I try to find some kids because they are very frightened and very depressed. And honestly that time I don’t go to Wamena because people are trying to protect the place where they were hiding. 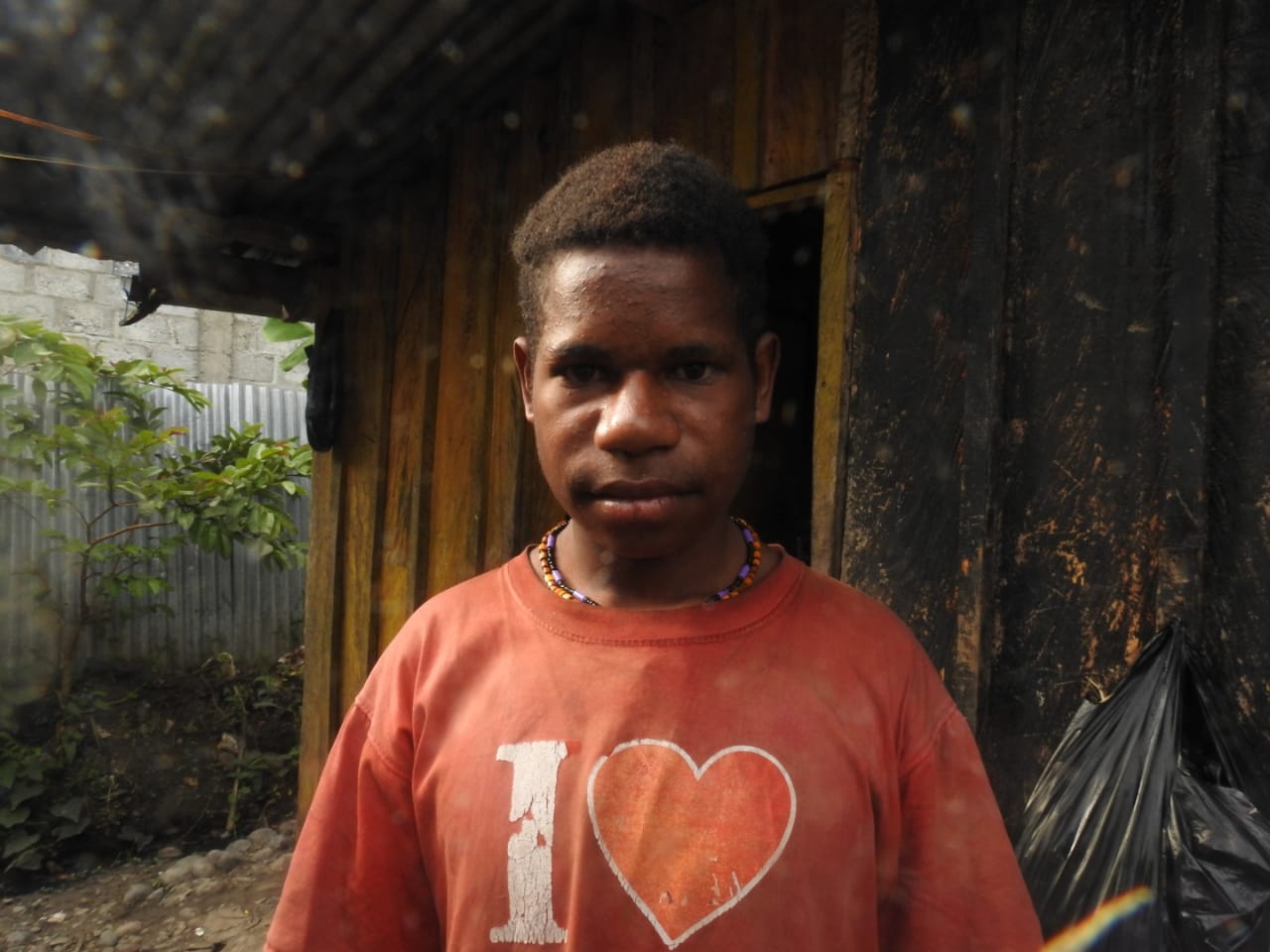 Liben Lilbid is one of the 600 kids that fled from their village in the Nduga region.
Source: Ignasius Dicky Takndare

And so I worked with my friend, Mr. Yanto Gombo, he’s one of the related artist from our community. I shared this story with him and I said that we have to try to do something because this is a very big thing that is happening in Papua but nobody outside of Papua knows about it. Yanto was in Wamena and I said ‘That’s good’ and together we tried to find those kids and Yanto goes to visit. I said to him ‘I want to you lead them, to direct them to draw their dreams’. Because for me, in this situation, the most important thing and the most difficult thing to do is to have dreams. Because you’re full of anger, you see your parents die, you house burned, you village bombed. There is no time for dreaming in this situation. But those kids they are brave, they still have it in their hearts. They still want to be something in the future. They all drew their dreams of the future. And I said ‘Yeah, your dreams, your Mairi. One day you will come to your Mairi and you will bring us all this Mairi. The paradise, peaceful Papua, freedom of Papua. Hopes of a better Papua’.

And I myself made a painting about them and we collaborate in this project. Those kids they’re staying in a few houses because there is a lot violence. People try to help them. A few of them life with those kids and those kids see that those people open their hand to us and help them. When we try to direct them to draw their dreams, some kids made a drawing about the usual things, some want to be a pilot, some want to be a doctor, or they want to be an office worker. The important thing is that none on them wants to be a cop. Some of them are scared. They draw a Morningstar flag. For me it’s a dream for the future and what they want to be in the future. They were very enthusiastic. They asked me that day ‘Please give us the pictures of our exhibition because we want to see people see our work’. And I send some picture to Yanto and he send it to them. 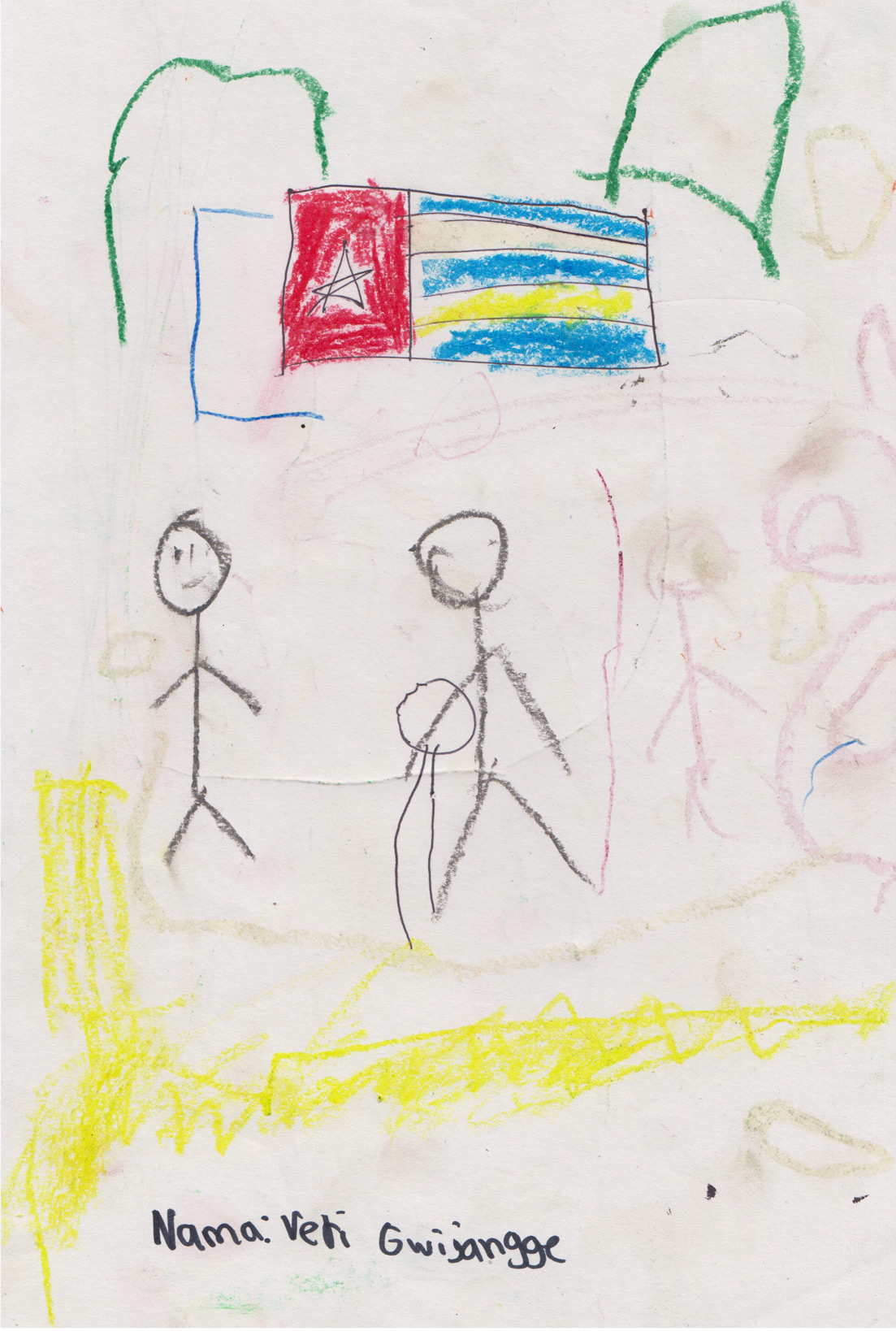 First and foremost I use the form of art as the first choice to create my life. I try to use art as a plan, a language, and a stage to tell what is happening in West Papua. But outside of Papua the subject isn’t very well known. And a lot of the stories and news reports just disappear, because the censorship is too strong. I think that I use art in different ways in order to open people's hearts, to humanity. To make sure that the problems in West Papua will also be recognized as a humanitarian problem.

The identity of the Papuans is in danger. The Papuan culture is really just been put aside on its own land. There are many factors which show this reality. The culture is actually slowly getting banned. For example the language. In West Papua we have different ethnic groups with different languages and dialects. From the 1960s and 70s we had to deal with certain processes of uniting with Indonesia, which meant we had to learn a new language and the old one slowly disappeared. Many have already disappeared and have not been mentioned in reports of the different ethnic groups in West Papua. But these things happen. 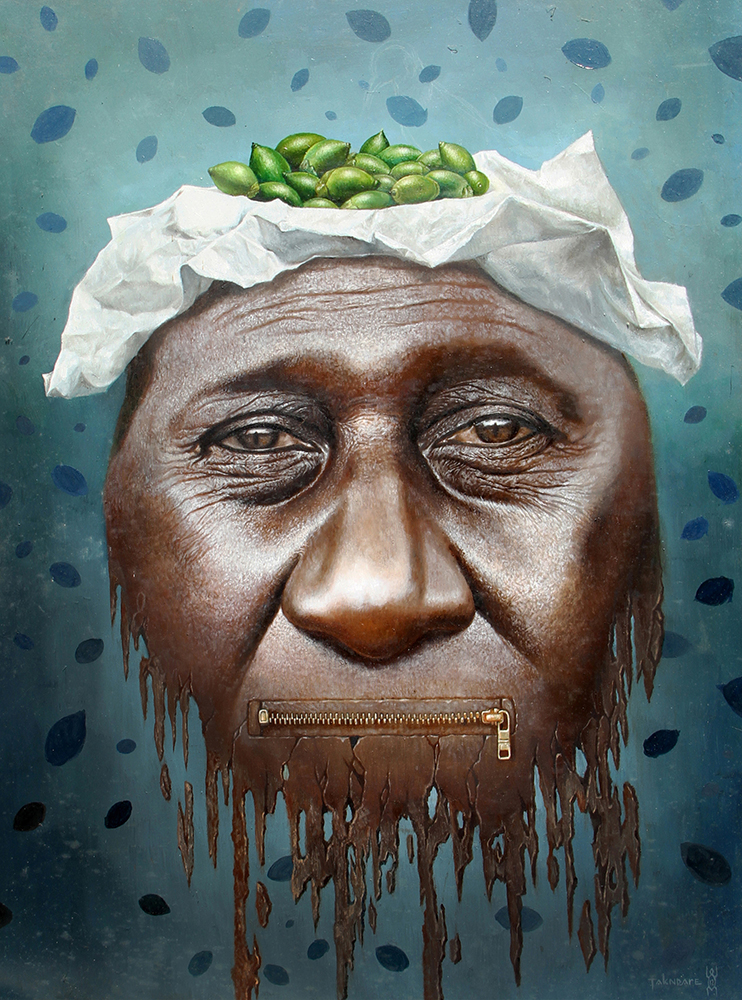 'The Ballad of Ana' by Dicky.
Source: Ignasius Dicky Takndare

Being concerned, being repressed as a Papua in this kind of situation is unfortunately a common thing. When people talk about this they, sadly, often share the same kinds of experiences. Being concerned, and everything that comes with it, is part of the battle. So we start with the smallest things. Personally, if I compare myself to my friends, there are certainly differences. They go through this struggle daily, but I work in the studio and I try to convey the message through my creations. I feel free in my heart. Because art gives freedom. Art makes everyone feel free.

A selection of paintings by Dicky.
Source: Ignasius Dicky Takndare

Art is difficult to separate from the Papuans because, compared to the modern world, we use art to tell stories. For example, to pass on stories to the next generations. It is not just for you to enjoy, it is an educational tool. By speaking it out by singing or dancing songs. Or by visualizing it in paintings. It is fundamental to the Papuans. Because when we look back at the history in Papua, every ethnic group had its own kind of school to train the youngsters in different arts like singing and dancing and everything else. We Papuans are therefore very attached to art. We reflect our identity in art. 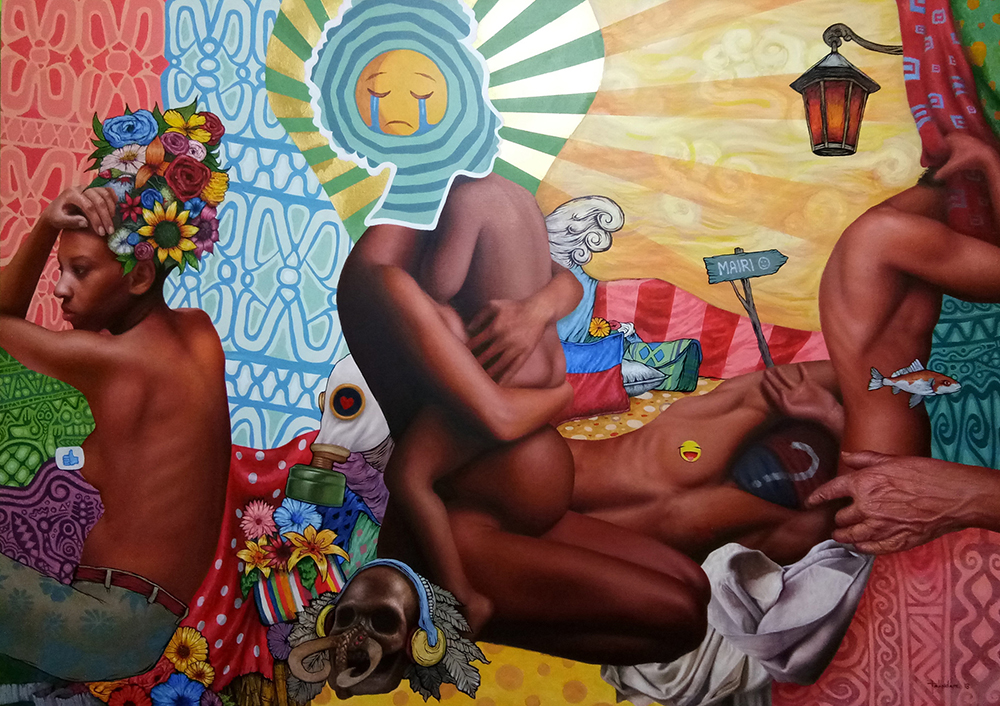 Good day everyone, I'm Dicky Ignasius Takndare, my calling name is Dicky and I'm a visual artist. I paint and I am a sculptor. I am from Sentani, Jayapura. I now live in Yogyakarta, Indonesia to continue my work.

All of you who learn a lot about your history, everywhere in the world. In the West, in the East, in the Middle East. Where the colonisation happened, but people get tortured. Environments are getting destroyed. But some people are in a very bad situation, living in Apokupai. That is happening right now. And it will take your breath. Even in Papua, it’s happening. So please all read, or write, or try to find something about us. Because now, then maybe you can help us.