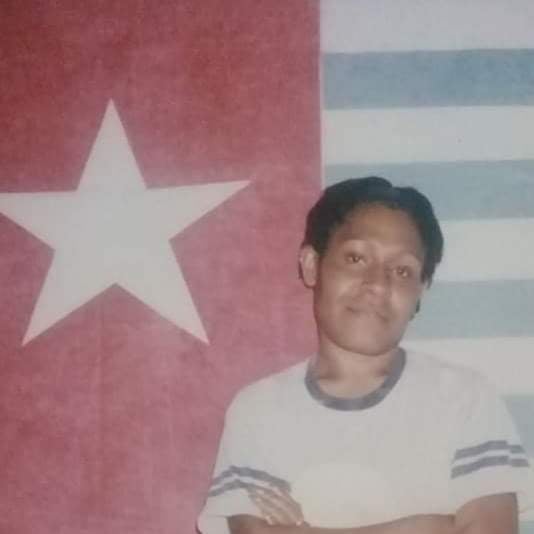 Because I come from the Dani tribe in Wamena. So, one operation done by Indonesia in that year, 1977. It’s Operasi Koteka, that’s the name. They killed us, they dropped a bomb in that year. So, my parents and my family, sometimes the older people they gather in the kitchen and they talk about it. They don’t want us to listen so they have to ask us to leave. Then they share their stories and they cry in the middle of the night. And one day I happened to wake up in the middle of the night and then I went to the kitchen because I could still hear people talking. I saw my family there, my mother's sister, same father but a different father, she was there crying. And they were talking about their experiences that happened in that year. And my mother’s sister, she was raped. The Indonesian military made her husband watch her being raped in front of him. That night they talked about that experience and they cried. So I went into the kitchen and I asked 'What is happening? I heard you talk about the things. You always say that you fled to the jungle because the Indonesian soldier changed you but you never told me about that. Tell me what really happened.' They told me that night. That really changed me. From that moment on I try to fight hard for the truth.

Once in Wamena, in 2007, there was a shooting. In, what is the name? It happened when I was there, in the field, to celebrate the indigenous peoples day. International indigenous people day. And one man got shot in Wamena, maybe if you Google that you can find it. And also the problem that happened in 2004 when they said that the OPM went to the military compound and stole the guns. They accused local people near my house and they caught one man. They put ropes around his neck and dragged him on the streets like a dog or like an animal. They did not allow us to come out of our house. I know this man. This man’s name is Japena Swoeri. I know him, I know his family.

And when I saw that I was very traumatized. I can tell you more but I think I can just share about those experiences that really changed me. Changed my mind.

There are many forms of racism that my people and myself experience. For example, I was raised in south Sulawesi. When I was in elementary school I faced all kinds of racism almost every day because of my hair, because of my skin. They call us monkey. There is a nickname they gave us. They say ‘ambon mareke’. It’s a nickname, it’s like black or ugly, something like that. And when I was taking my diploma in the university. I studied in Java. Almost everyday we faced racism. When we sit in a bus, everyone will stare at us like we are some kind of an alien. And the form of racism that happened last year, I’m not really surprised because I’ve been living in Java for 8 years. I’ve been living in Java for almost 8 years. I know exactly how the Javanese see us. They think that we will accepted what they call us. But we cannot stand the form of racism anymore.

Everywhere in Indonesia you can peacefully protests, except for West Papua. You can ask, if you know Papuans here, or if you happen to know someone who has family here, you can ask them. They will tell you exactly the same. If we are planning a peaceful demonstration, then they will not allow us. Police will come with a car and stand in every ally, just to stop local people, local Papuans from using public transportation to join the demonstration. So here there are not places for us to report about what is happening to us. Even the police, they are part of the system. In the law, local West Papuans and Indonesians are treated differently. Where should I report about violence that happened to me? To us Papuans? Where? There is no place for us to report to. So the only thing that can really help us is attentions from international communities. Because finding justice here is impossible. To go to the police or to go to the court, they are a part of the system. They treat us differently. So if you ask every Papuan the same question they will say ‘Where? We don’t have that kind of place where we can make a report’. Even the killings that happened in Papua until now. We didn’t get anything, not even justice.

We’ve been trying to stand up for the things that are happening. We want the world to see or to hear what is happening right now because no international journalists can come to West Papua. Or any attempt at coverage about West Papua is being watched [by Indonesia]. Because of this Black Lives Matter issue we have now found the right moment to stand up. We have been facing racism for so long. But because of this issue that happened to George Floyd in America, there are others. In Indonesia there are also black lives. What they face in America is also faced by West Papuans, black West Papuans in Indonesia. And we want others in the world to pay attention to that. Because there is a military operation happening right now. The Indonesian diplomacy at international level, they paid many countries to ignore the things that are happening in West Papua. So this Black Lives Matter issue is a momentum for us to also stand up against the racisme that we have faced for so long. 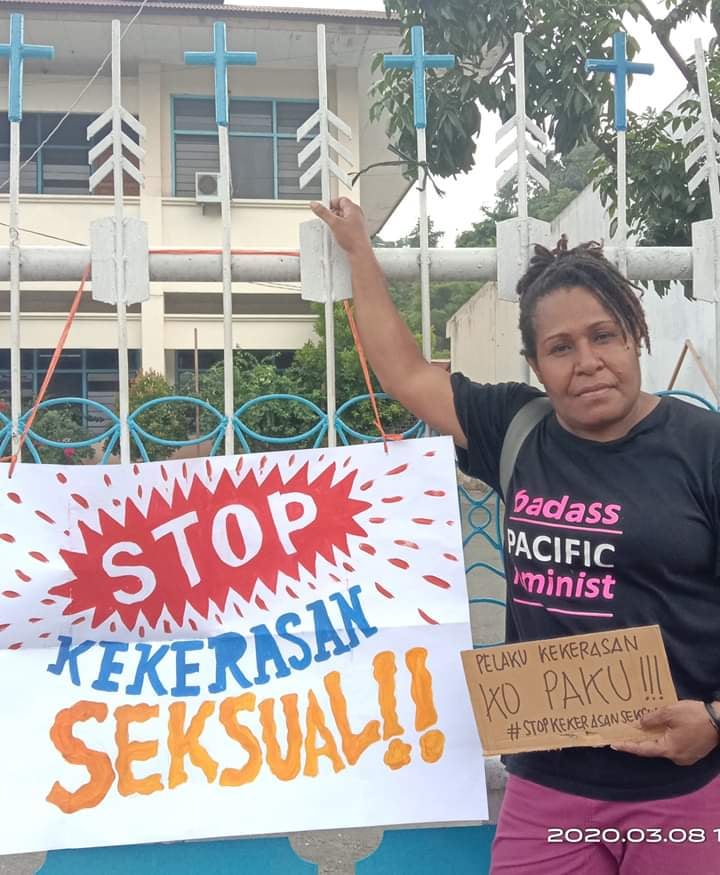 When we talk about West Papua, we are dealing with this colonialism. We talk about issues faced by women but we also talk about the bigger picture. What I’m doing now with my friends, because of the high mortality rate in Papua, there are many issues related to women that we face now. It’s a lot of work to do. We cannot focus really because there are so many things happening now. When we talk about women, related to land rights, or domestic violence or related to the policies. There are so many things. What we are doing now with my friends, we focus on one issue and we try to at least start a discussion, changing mindsets.

It is hard to be a woman in West Papua because we face oppression, we are under occupation of Indonesia, we face many things. When we talk about women's position within a society. When we talk about violence. We have three layers that are faced by women in West Papua. The first one is being oppressed as a part of a patriarchal society and a patriarchal culture. Women are put as a second class. We do not have the right to decide. Or to be involved into the decision making that involves our lives. In the customary council, women are not involved. Women are not involved when men wants to sell a piece of land. They don’t involve women in decision making. Those are things that are faced by women in West Papua. And the second one is the problem of gender bias in the church. The missionaries came and started in 1855. They are teaching, that men should at the head of the church. So those are the bible verses are inherited by the present churches. Women are not allowed to preach. Women are put as a second class, also in the church. And the third one is the structural violence by the state. All the government policies, the laws, implemented in West Papua, don’t pay attention to the rights of women. The government is not really focussed on the rights or issues of women. That’s why we have layers of oppression towards women so when we talk about the bigger picture, about the the situation of West Papua, those are the things that we have to deal with in order to talk about self-actualisation of women and things like that.

As a West Papuan, as a activist, even though we are living under the oppression and so many human rights abuses that are happening on our land. When we talk about our future, I still believe. We will get freedom, we will get our freedom. Because, yeah, we stand up for our rights. The Indonesian knows from the start that in our history, they know that they did wrong things to us West Papuans. They know that. They know the truth. As a West Papuan, we believe that one day we will get our freedom. No matter what. If you ask me as a West Papua, I see a future, even though the Indonesian do whatever things, the bad things that they are doing now. Besides, we know the price. We know that there is a price that we have to pay to get out freedom. And we are ready for that. When we are involved in this struggle, we know the risk. As a Christian, I still believe. One day we will get our freedom.

My name is Esther Haluk. I am a women's activist but I also work in a church. I started to be involved in the freedom movement organisation since 1997. And I was an activist in the students movement in Java because I studied there. When I came back to West Papua I started organising women’s activisme to support his movement, until now.

This is a message to our friends, brothers, and sisters all over the world. We the people from West-Papua are being chased down, we are being killed, our identity is being erased. If you don’t stand up, if you don’t speak up, you are not helping us with our problem. We are already a minority in our own land, we are disappearing. We are asking for solidarity from our friends, brothers and sisters with different background from all over the world. We want self-determination for West-Papua. We don’t want to be part of Indonesia! Free West Papua.