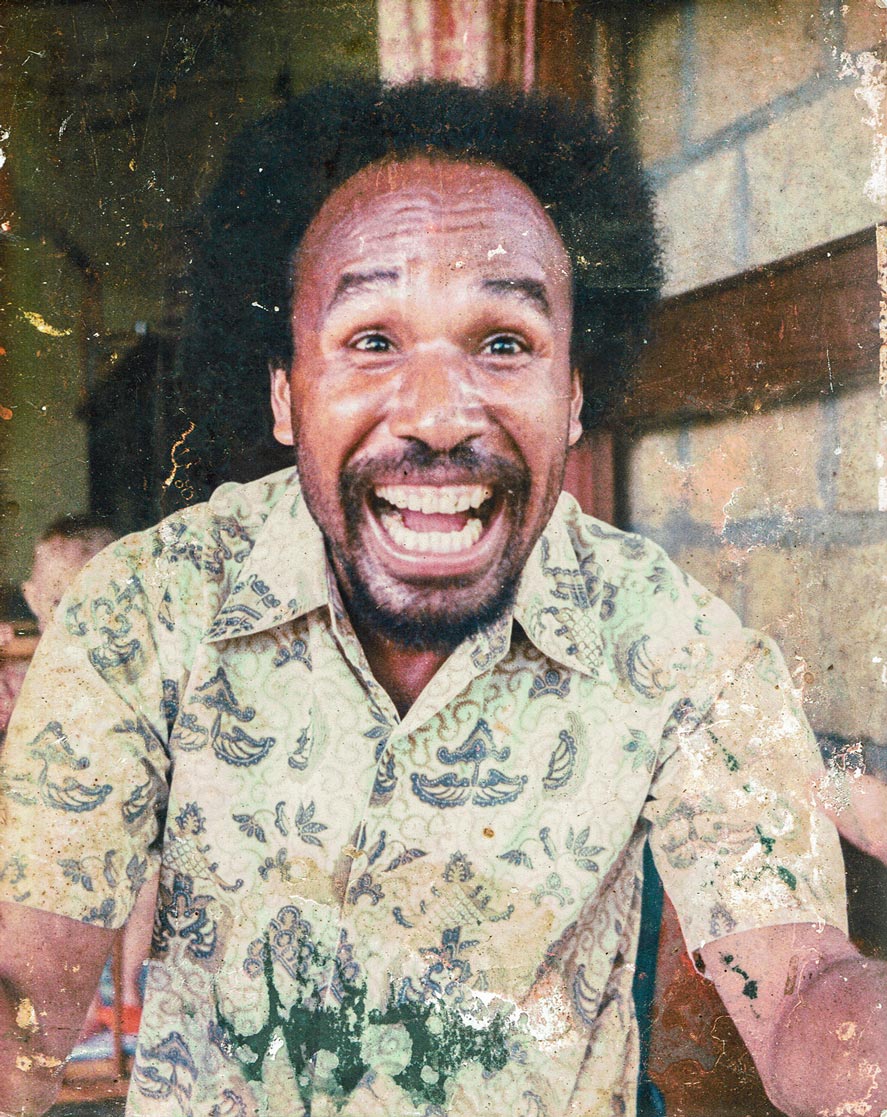 The Mambesak group was formed by us together. The chairman of the Mambesak group is the father of Raki Ap. We had a plan for our people, because the western side was Dutch New Guinea, and the eastern side is Australian New Guinea. Together they have more than a thousand languages. We want to unite our people in West Papua. We must work together as one people.

So we formed the Mambesak group to develop the unity of the Papuans of West Papua. But Jakarta did not like that. They want us to be separated so that we wouldn't work together. So Jakarta sent elite military personnel to kill us. So that's why our chairman, Raki's father, was the first to be killed by the Indonesian military. 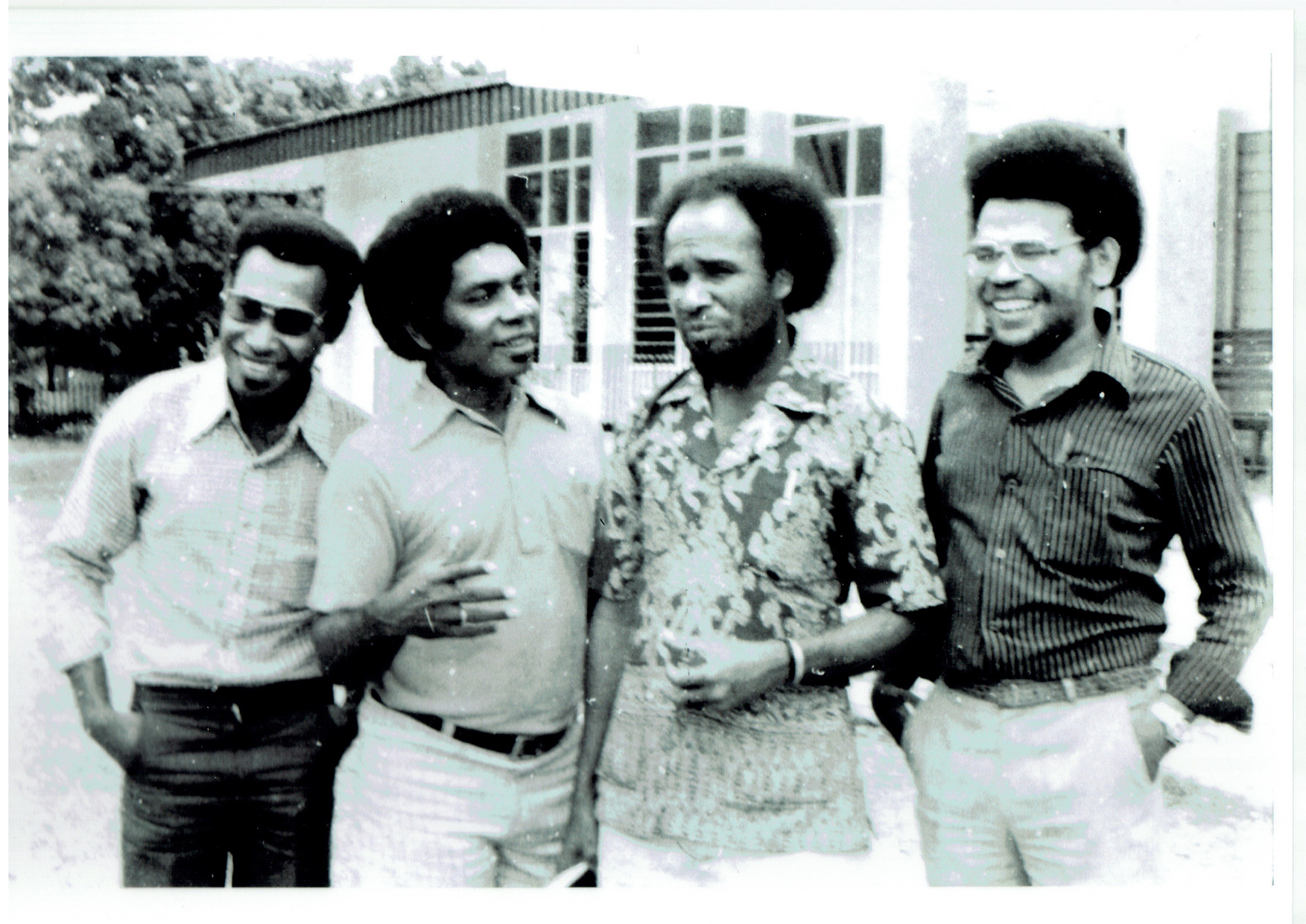 I was lucky to escape in the middle of the night with a boat to Papua New Guinea, to the neighboring country. That's why I'm safe until now. In the neighboring country we lived in the jungle, together with my wife Johanna and the wife and children of Arnold, the chairman of Mambesak. Johanna and I have lived in the jungle in Papua New Guinea for 10 years and 7 months. Fortunately, we received an invitation from Queen Beatrix, from the Dutch government, to come to the Netherlands. On September 20, 1994, we were brought to the Netherlands by the United Nations.

Because I was always active in theater and art, I have many contacts worldwide churches and organizations around the world to follow activities there. For example, I received an invitation to go to America to study at San Diego University in California. And also for Northern Illinois University. And for the American Repertory Theater. But it is a pity, because I received a special letter from the government of Papua New Guinea in which they dumped me. They did not allow me to travel to other countries because I am a political man. That's the reason. In 1989 I received an invitation from Rio de Janeiro, Brazil to follow activities there. But the Papua New Guinea government dumped me. In 1992 I received an invitation from Australia to do theater activities there, but again I was dumped. Also from the world churches I have received invitations several times to spread the word of God all over the world through theater. But unfortunately the government of Papua  New Guinea dumped me, so I couldn't go to all those countries. That is why I decided to come to the Netherlands as a political refugee. To work there with our Papuans in the Netherlands.

Pictures of an early theater group that Demmy was a part of. They visited Bali, Java and other places in Indonesia to perform.
Source: Demmy Koerni

For me, I feel like I've lost my future because I made the wrong choice. I thought the Papuans in the Netherlands would work with me so we could fight for our independence together. But my chance to study for my own future has disappeared. We didn't fight together, one wants his own time. So yes I worked for myself, not for others. However, our struggle still continues.

Do you know why Indonesia is so eager to take our country? Not because of the similarities between our people. Because we are not like the Indonesians. Indonesians are Asian. We Papuans are Melanesians of the Pacific region. Fijians, and Papua New Guineaneans. And we Papuans ourselves, we are Melanesians. But we are not Indonesians. 5 countries talked about the riches of our country in Borneo. Now it is called Kalimantan. The countries that talked about us were America, Indonesia, the Netherlands, England, and Australia. They talked about our wealth when Sukarno, the first president of Indonesia, stood next to the conference table and said "If the Netherlands continues to defend New Guinea, then I will go to the Soviet Union to ask for help."

That's the reason America became scared. If war came, the Netherlands could not properly defend New Guinea. New Guinea with the riches of 33 different kinds of minerals. Uranium, gold, silver, and everything. It would all fall into the hands of the communists. That is the cleverness of the Indonesian president, Sukarno. Dutch politics were defeated. So America thought that the Netherlands could not properly defend New Guinea and that it would fall into communist hands. Then America would no longer be able to profit from the wealth. Do you know why? The largest gold mine in the world is on the island of New Guinea, in West Papua. The Freeport McMoRan company, owned by America. Our Foreign Minister Luns was unable to properly defend the country because Prince Bernhard went to America to ensure that the Netherlands would leave our country. That is why the Netherlands lost our country. Not for other reasons, but because of the riches of Papua.

Dutch geologists have found the riches. But the Dutch government sold the findings to America, so America wanted that country. That is why they supported Indonesia and the Netherlands had to leave. That is why we are political refugees, until now.

But we still long for our country, till this very day.

My name is Demmy Koerni. I studied to become a teacher. And I am active in art and theater.

We are people. We long for the human feeling of the whole world. So if you, inhabitants of the world, have human feelings, help us. Because the Indonesians are the killers of the world. When the Dutch colonized us, they never killed anyone. But when Indonesia came, she killed people from 1969 to the present day. 700,000 people, half of our people are destroyed, murdered, humiliated by Indonesian soldiers. So we ask for people in the world who have feelings, help us, support us, to gain our independence, in our hands.

(Demmy sings a traditional song in the Biak language about the regrets of the Papuans. Why the Dutch left them like this.) 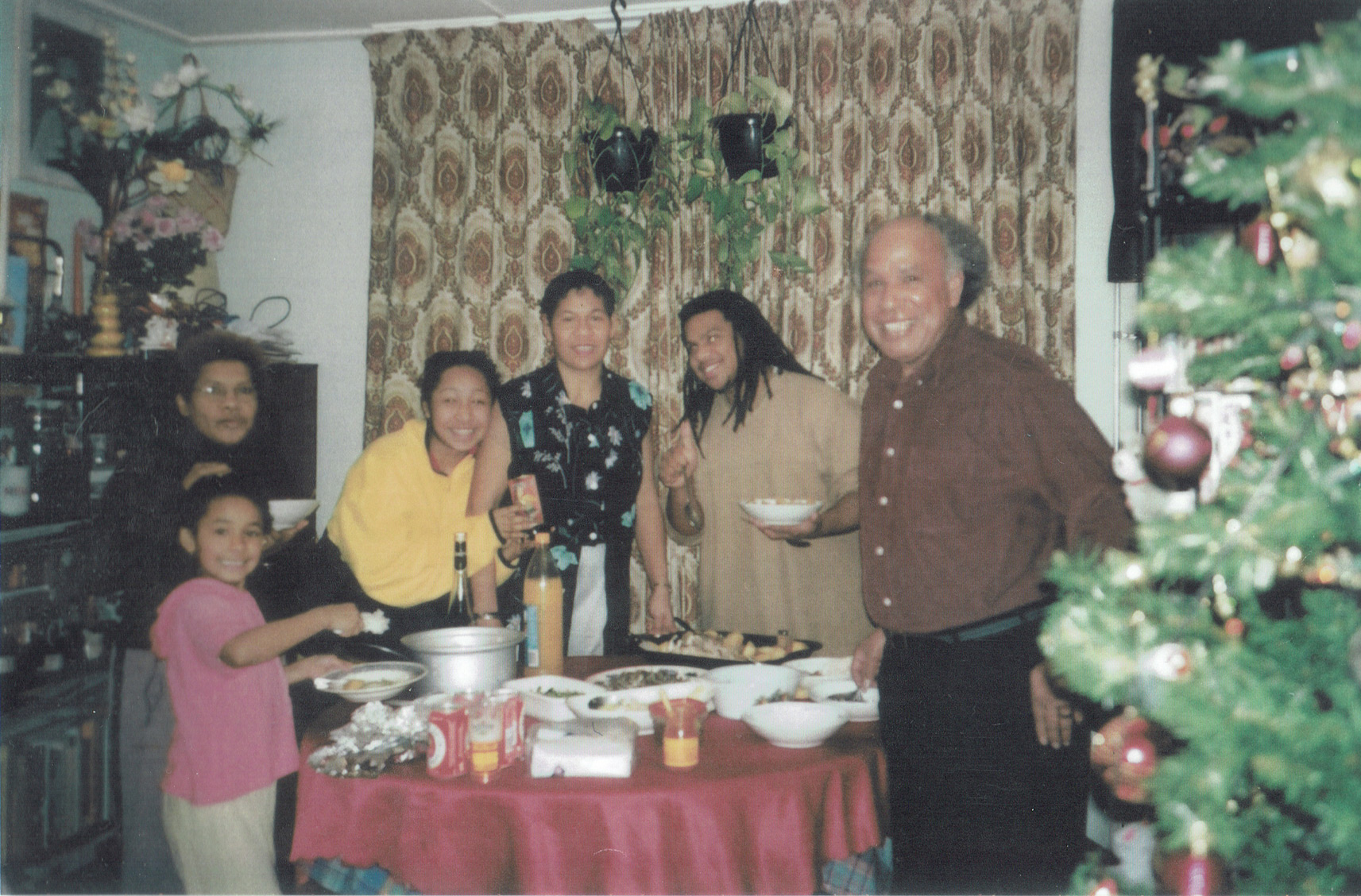 The Koerni family celebrating christmas with guests in their home in Deventer.
Source: Demmy Koerni